31.03.2021Seminar of Dr. RegmiOn March 31, 2021 at 2 pm Dr. Chhabilal Regmi (postdoc ChemJets2 at UCT) will present a lecture on Advanced Bifunctional Materials (MS Teams link below)
06.12.2018Junior projects of Czech Science FoundationTwo young scientists succeeded with their project proposals to the Czech Science Foundation (GAČR)!
17.09.2018Program of seminarProgram of the joint seminars of UCT Prague and IOChB held on Fridays, at 3:00 pm in the conference room of FChE or IOCB club for winter term 2018/19.

05.09.2018Arginine "magic" of guanidinium cation!Review of J. Heyda and colleagues on guanidinium ion pairing in Accounts of Chemical Research!
22.02.2018Program of seminarProgram of the joint seminars of UCT Prague and IOChB held on Fridays, at 3:00 pm in the conference room of FChE or IOCB club for summer term 2017/18.

Invitation to seminar on March 31, 2021 at 2 pm of the Department of Physical Chemistry, University of Chemistry and Technology Prague where Dr. Chhabilal Regmi (postdoc ChemJets2 at UCT) will present a lecture Advanced Bifunctional Materials.

How volatile ionic liquids actually are?

Ionic liquids (ILs) possess a vast potential for numerous technologies (gas capture, smart electrolytes, nanoparticles exfoliation media, etc.), as ILs possess unique properties such as low volatility, large electrochemical window or a boundless structural variability. Broader exploitation of their beneficial characteristics is impeded by their cost, limited availability of the physico-chemical data or an insufficient understanding of ILs-related phenomena. Known for a century and considered nonvolatile for decades, ILs were proved to possess a non-zero saturated vapor pressure only a decade ago. Still, volatility of ILs is lower by orders of magnitude when compared to common molecular solvents. Such an extremely low volatility is a principal obstacle impeding reliable and reproducible measurements of their vaporization data. Significance of these properties for extremely low-volatile chemical species can be illustrated by the environmental distribution of highly persistent compounds, considered almost non-volatile. These, however, spread via the atmosphere even to the polar regions, where they concentrate in plants, animal or human tissues, acting as mutagens subsequently. Data on volatility of chemical species are the key inputs for modelling the environmental distribution of pollutants. 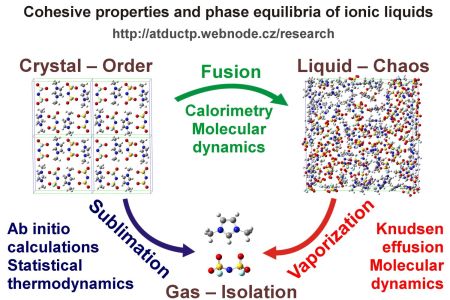 Fig: Schematic representation of computational and experimental techniques planned to be used for individual phases of ILs.

A rigorous methodology, capable of accurate determinations of the volatility (and other phase equilibria) of ILs, which would be based on more reliable approaches (combining experiments and first-principles calculations) than the direct measurements of vapor pressures of ILs would certainly find use in the future process design and selection of suitable ILs. Especially if there are millions of relevant ILs systems, while the thermodynamic data exist for hundreds of ILs. Employment of high-level ab initio calculations, molecular dynamics and experimental calorimetry or effusion measurements represents a worldwide unique approach for solving such a task.

Proteins are key biomolecules which participate in almost all processes in cells. In living organisms, the proteins are synthesized by large biomolecular complexes called ribosomes. Ribosomes read the genetic information temporarily stored in a strand of ribonucleic acid, and translate it into a sequence of amino acids. The ribosomes catalyze the formation of peptide bonds making it possible under conditions common in living matter.

Because the catalytic center is buried deep in the ribosome, all nascent proteins leave the ribosome through an exit tunnel. The tunnel has important medicinal implications. It contains a binding site for a large class of antibiotics and incorrect protein folding initiated near the tunnel exit may lead to severe neurodegenerative disorders. Fig: A cross-section through a prokaryotic ribosome with a several conformations of a nascent protein in the exit tunnel.

Hence, the project will focus on what happens inside the exit tunnel. Such information is difficult to obtain by traditional experimental techniques like X-ray crystallography or cryo-electron microscopy, because the tunnel content is rather flexible, hence blurred on the images. Large-scale molecular dynamics simulations offer an alternative with high spatial and temporal resolution. Using such simulations, Michal and his coworkers will study, how the tunnel content affects the dynamics of the ribosome. They hope to identify new pathways which transfer a signal from the ribosome interior towards its surface.

Program of seminarProgram of the joint seminars of UCT Prague and IOChB held on Fridays, at 3:00 pm in the conference room of FChE or IOCB club for winter term 2018/19. 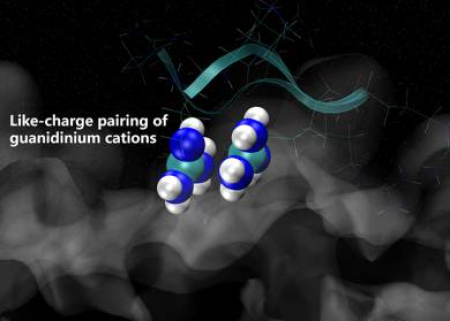 We knew that guanidinium cation is an unique species, which desire our attention. Its ability to form cation-cation pairs is manifested in aqueous solutions of guanidinium salts as well as between arginine sidechains in proteins.

Such arginine magic was pointed out to lead to an unexpected attraction between polyarginine chains with consequences to the action of arginine-rich cell penetrating peptides.

Program of seminarProgram of the joint seminars of UCT Prague and IOChB held on Fridays, at 3:00 pm in the conference room of FChE or IOCB club for summer term 2017/18. 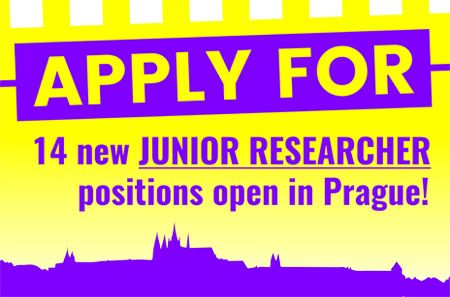